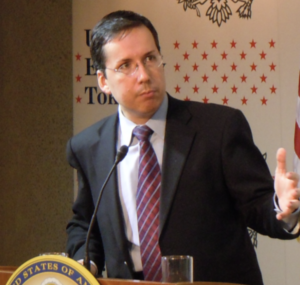 Nicholas Kralev is an author, journalist and entrepreneur specializing in diplomacy and international affairs, whose work of more than 20 years has taken him to almost 100 countries.

He is the executive director of the Washington International Diplomatic Academy, an independent organization that provides practical professional training in diplomacy and international affairs.

A former Financial Times and Washington Times correspondent, he witnessed firsthand the conduct of American diplomacy while accompanying U.S. Secretaries of State Hillary Clinton, Condoleezza Rice, Colin Powell and Madeleine Albright on their travels around the world. He is also the host and executive producer of the TV series on diplomacy Conversations with Nicholas Kralev.

He is the author of America’s Other Army, Diplomats in the Trenches and Decoding Air Travel. His work has been published in The New York Times, The Atlantic, Foreign Policy Magazine and The Huffington Post, and has appeared on NPR, CNN, BBC, Fox News, C-SPAN and local stations across the United States and around the world.

He holds a master’s degree in public policy from Harvard’s John F. Kennedy School of Government and speaks five languages.